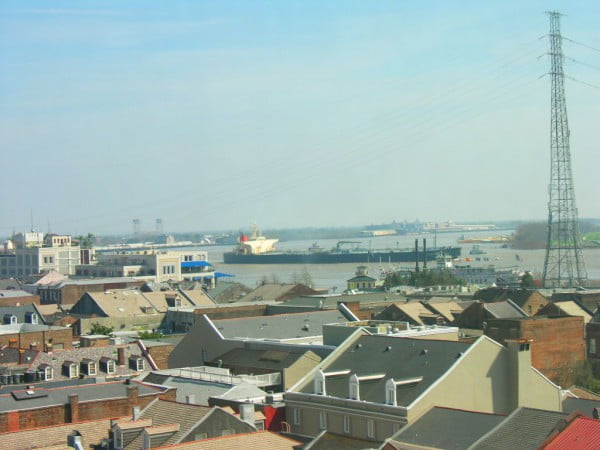 The news that residents of New Orleans are giving up and leaving after trying hard to stay makes us wonder whether the city can survive as anything like it once was. While we may blame events on particularities, including mistakes by politicians and government officials, underlying all this is an ecology of cities, an almost environmental determinism about where and when cities survive, prevail, and rise to glory, especially cities that are on bodies of water, rose because of them, and depend on them.

The small town of Weston, Missouri is a useful comparison. When Lewis and Clark passed this way on their 1804 trip up the Missouri River, Clark noted a natural harbor, created because the river threw the force of the water against the shore, and this happened because an island in the river made the Missouri flow rapidly and erosively around it. Clark wrote that this would be a good site of a harbor where crops could be shipped to St. Louis — he saw also a stream for drinking water and flat lands for building. He was right; within thirty years Weston was a thriving a harbor town --- until 1881, when the fickle, rambling Missouri River cut through its meander and overnight stranded Weston two miles for its flowing waters. Shortly after people abandoned Weston, not bothering to take down its buildings — to our benefit, as today Weston is an attractive historic tourist town and home to commuters working in nearby Kansas City. Weston’s lovely buildings contrast with the blander constructions of the twentieth century, and the town claims, among other attractions, the oldest continuously functioning bar west of New York City. That is to say, the historical, but not the river-business, aspect of the town survived and has revitalized.

The same thing happened to Bruges, Belgium, originally settled as an Atlantic Ocean port. But over the centuries the ocean inconsiderately deposited miles of sandy beaches, until Bruges was just too far from the ocean to be a useful port. Like Weston, Bruges suffered rapid population loss. Like Weston, Bruges has revitalized as a lovely tourist town with Venice-like canals and beautiful buildings of a bygone time.

The ecology of cities is that people create them where it is easy to meet (good transportation to and from) and there is a good site for building, or, as in the case of New Orleans, its location is so good that people create a city in spite of poor building conditions. The Venetians did this by driving millions of tree saplings into the shifting mud and sands of the Adriatic.

From an ecologist’s perspective, New Orleans is three cities: a harbor, a business and residential city, and an historic city. Since New Orleans was founded, the Mississippi, like its rambling tributary the Missouri, has messed around with New Orleans’s site, depositing huge quantities of sand, mud, and soils past the location of the original city and changing its channels many times. The Army Corps of Engineers has added to these changes, and the best location for a harbor at the mouth of the Mississippi need not be exactly where New Orleans’s harbor is. Given the history of other cities which have suffered dramatic environmental change, and given the almost-environmental determinism of cities, it is unlikely that New Orleans will survive in anything like its past glory. What is likely to remain, as it has in Weston and Bruges, and for that matter, in Venice, Italy, is the charming and creative historic city, a small remnant of its former self. The harbor is likely, given enough time, to move to the most practical location. The business and residential New Orleans seems fated to fade away. Unless, of course, massive amounts of funds, beyond those paid out and promised, are forthcoming. Our society could resist the almost inevitable rules of ecology, a kind of new battle of New Orleans, but given the human tendency to muddle through rather than solve environmental problems with great foresight and wisdom, perhaps we need to accept the almost inevitable and help the much-suffering residents of the city move onto happier and more productive locations.