ENERGY FOREVER: A SOLUTION TO OUR ENERGY PROBLEM

The answer to our energy crisis lies in a farm field in Bavaria, Germany. There, sheep graze beneath an unusual crop: an array of black rectangles mounted on long metal tubes that rotate slowly during the day, following the sun like mechanical sunflowers. This is the world’s largest solar-electric installation, generating 10 megawatts on 62 acres. Scaled up, just 3.5% of Germany’s land area could provide solar energy equal to all energy used in Germany --- by cars, trucks, trains, manufacturing, everything! And this would not have to be on otherwise empty land; it could be on rooftops, above parking lots, and integrated with certain kinds of pasture and cropland.

Solar energy collection seems unlikely in Germany’s climate, and even less likely in Bavaria --- a landscape famous not for sunshine but for high mountain peaks and beautiful winter resorts. In Munich, Bavaria’s major city, about one-third of the days are rainy all year long, the average January daytime temperature is 34o F, and the average August daytime temperatures a mild 73o. 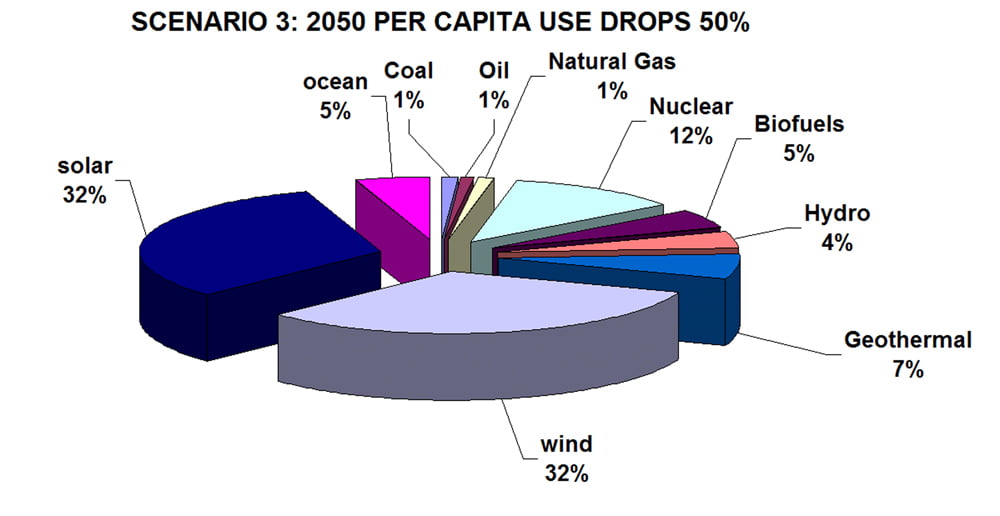 Here is a possible future for our energy sources, which moves away from fossil fuels. In my book, Powering the Future: A Scientist’s Guide to Energy Independence, I show that this change in our energy use, from heavy dependence on fossil fuels to two-thirds from solar and wind, is possible. I also show how much it will cost and how much land area it will take.

So why aren’t nations rushing to install solar power facilities? Are costs prohibitive? In 2002 Con Edison built New York City’s largest commercial rooftop solar energy system for $900,000, providing energy for 100 houses. At an average of four people per home, the installed cost is $2250 per person. For the 300 million United States residents, the installation cost would be $675 billion.

The U.S. balance of trade is in the red about $60 billion a month, or $720 billion a year, and much of this trade imbalance is due to the cost of foreign oil. So, for the equivalent of one year’s trade imbalance, the United States could pay the cost of installing solar energy facilities for all domestic electrical consumption.

The war in Iraq --- justified, many say, in part to protect our sources of petroleum --- has cost an official federal allocation of more than $506 billion. In January, a report by Nobel Prize-winning economist Joseph Stiglitz estimated that the total true costs of the Iraq war could be between $1 trillion and $2 trillion. For the cost of the Iraq war --- or perhaps just one-half or one-quarter of that cost --- solar energy systems could have been installed to provide domestic electricity for all the people in America: energy forever!

The numbers become even more amazing for the dry, sunny climate of Arizona. Based on facilities already installed there, covering just 1% of Arizona’s land with these solar collectors would produce electricity for 275 million houses --- considerably more houses than exist in the United States.

Solar energy, of course, has many other benefits --- primarily independence from foreign suppliers and greatly reduced air and water pollution, including less greenhouse gas. It also offers the option of decentralized energy production, which would reduce the risk to our energy supply from terrorist attacks.

Why isn’t the United States pursuing solar energy production? The conventional wisdom of environmental economists I know is that solar will never be more than a minor player in the energy game. World-famous environmentalist James Lovelock says the same thing. Is it just a mind-set that is holding us back?

Perhaps big power companies stand to lose too much revenue (and control over power distribution) if decentralized generation takes over when solar power is produced on rooftops.

Perhaps, despite the clear need to move away from petroleum, there is just too much money riding on oil production and distribution for us to let go easily. Whatever the reasons have been, the facts tell us that we should wait no longer.