In 2004 a group of scientists, including myself, met and discussed what needed to be done to improve the ability to forecast the possible effects of global warming on biodiversity.  The result was a paper published in BioScience, the journal of the American Institute of Biological Sciences (AIBS).

In that paper, we proposed a “Quarternary Conundrum” — we found that the fossil record gave results about climate change and biodiversity that did not agree with modern forecasts.  Here is what we wrote about that idea.  (If you are interested in more from this paper, let me know and I will post more of it, or you can obtain it from AIBS.) 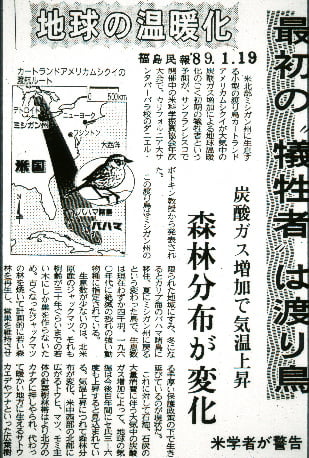 Current forecasting methods suggest that global warming will cause many extinctions, but the fossil record indicates that, in most regions, surprisingly few species went extinct during the Quaternary (from approximately 2.5 million years BCE to the present)—in North America, for example, only one tree species is known to have gone extinct (Bush and Hooghiemstra 2005). Large extinctions were reported mainly for tree species in northern Europe (68% loss of tree genera; Svenning and Skov 2004) and for large mammals (> 44 kg) in the Northern Hemisphere (MacPhee 1999).We refer to this contrast between the implications of modern forecasts and the observed fossil record as the “Quaternary conundrum.” The resolution of this conundrum is key to improving forecasts of climate-change effects on biodiversity. Among the possible explanations are that climate change during the Quaternary was greatly different from climate change forecasted for the future; that genetic and ecological mechanisms, not accounted for in formal forecasting methods, allow the persistence of many species even under rapid climate change; and that factors in addition to climate change could decrease rates of extinction.

Some recent ecological genetics research further deepens the puzzle. For example, the risk of extinction for a species in response to climate change depends on the demography and evolution of genetically differentiated populations across their geographic ranges. If populations are locally adapted, climate change will cause conditions to deteriorate across the species’ range, rather than just at the margins of the range. Modern reciprocal transplant experiments, in which spatial gradients in climate serve as proxies for temporal climate change in the future, show that these fitness losses can be large (Rehfeldt et al. 1999, Etterson 2004). For example, a reciprocal transplant experiment on lodgepole pine in Canada indicated that global warming would slow tree growth and increase mortality, resulting in a 20% loss of productivity (Rehfeldt et al. 1999). Likewise, a study of a prairie annual in the Great Plains of the United States showed a 30% reduction in seed production in climates similar to those predicted for future decades. Ecological genetic data, in each of these cases, predicted different rates of adaptive evolution in different parts of the species’ range (e.g., rear and leading edge; Hampe and Petit 2005) but generally suggested that evolutionary rates would be slower than the anticipated rate of climate change (Etterson and Shaw 2001, Rehfeldt et al. 2002).

Until recently, it was thought that past temperature changes were no more rapid than 1 degree Celsius (oC) per millennium, but recent information from both Greenland and Antarctica, which goes back approximately 400,000 years,indicates that there have been many intervals of very rapid temperature change, as judged by shifts in oxygen isotope ratios. Some of the most dramatic changes (e.g., 7oC to 12oC within approximately 50 years; Macdougall 2006) are actually of greater amplitude than anything projected for the immediate future. Although these changes were probably not equally severe everywhere on the globe, a well-documented rapid warming did occur around the shores of the North Atlantic at the end of the last glaciation, when melting of the ice cover on the ocean suddenly allowed the Gulf Stream to reach the shores of northern Europe. There, temperatures rose rapidly, perhaps as rapidly as anticipated today for the next several decades (Huntley et al. 1997).

What could explain the Quaternary conundrum? One possibility is that migrations were faster than has been thought possible. A large literature examines late-Quaternary range shifts deduced from the pollen record, and recent papers consider models and seed-dispersal mechanisms that may account both for migration across geographic barriers and for rapid invasion of new territory. Sparse populations of several tree species are now known (from genetic and macrofossil evidence, supplemented by detailed analysis of mapped pollen data) to have persisted during the last glacial maximum in regions where very few, if any, pollen grains have been observed—regions that for this reason would be judged well outside the climate envelope for these species (Tomaru et al. 1998, Brubaker et al. 2005, McLachlan et al. 2005, Magri et al. 2006). These populations serve as advance colonists, allowing rapid population growth in newly available habitat.

A second explanation is that low extinction rates during Quaternary climate change may be partially attributable to ongoing adaptive evolution. Theoretical models suggest that adaptive evolution can enhance the persistence of populations in a changing environment even when migration is possible (Bürger and Lynch 1995). And rapid genetic adaptation to climate has already been documented for a few wild organisms for which long-term studies of field populations have been conducted (reviewed in Bradshaw and Holzapfel 2006). Invasive species have also evolved since their arrival in a new habitat in the 20th century, at surprisingly rapid rates of evolution (e.g., Huey et al. 2000).

A long-standing controversy regarding the role of people in Quaternary extinctions of large mammals speaks to the difficulty of quantifying impacts of multiple factors on species loss. The high extinction rate of large mammals has been widely recognized since the 19th century, and extinctions of large mammals and island birds over the past 100,000 years have been the subject of much conjecture. Paul Martin has made the now well-known case that the timing of extinctions followed human dispersal from Afro-Asia to other parts of the globe and that these extinctions resulted from human “blitzkrieg” overkill (Martin and Steadman 1999). But careful analysis of well-documented extinctions in Beringia suggests that human hunting was superimposed on a preexisting trend of diminishing animal population density (Shapiro et al. 2004, Guthrie 2006). These data suggest that the interaction of environmental change and human resource use can have a larger negative impact on biodiversity than either factor alone.