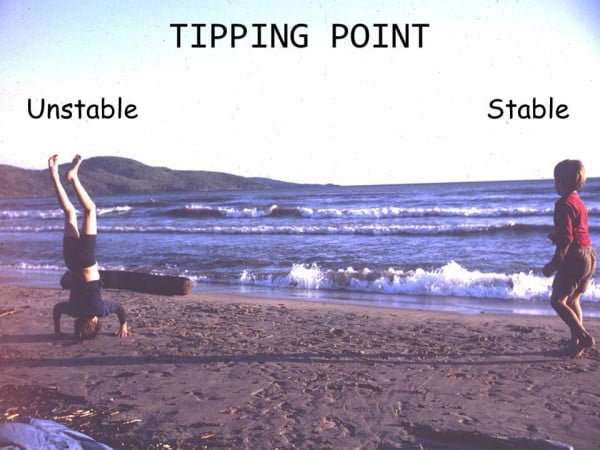 Tipping points are in the news these days because some of the well-known scientists who are concerned about global warming keep telling us that the Earth --- the Earth’s global environment, that is --- is nearing a tipping point.  The idea is that the environment may undergo changes from which there will be no return; the Earth’s environment will figuratively fall off a cliff.

Underlying this belief that our environment has tipping points and we might be nearing one is a deeper belief: that the Earth’s environment is stable, that undisturbed by human influences it would be constant, or close to it.  Allied with this is the belief that our own actions are pushing the Earth toward the edge of a tipping point in ways that have never happened before.

The idea that our environment --- nature, as it used to be called --- is pretty much unchanging except for what we do is an ancient belief. It goes back to the Greek and Roman philosophers, who expressed it as the great Balance of Nature: that nature undisturbed achieves a permanence of form and structure, and that even when disturbed by us, if we then leave it alone, it will return to its harmonious constancy.

That idea has followed Western civilization down the ages, and in the 20th century was a fundamental belief even among ecologists --- scientists who study the relationship between living things and their environment.  But as I’ve shown in my book Discordant Harmonies: A New Ecology for the 21st Century, nature has always changed.  All the climate reconstructions show that change is its only constant property.  To be more technical about this, modern science tells us that natural ecological systems and their environment are non-steady-state systems.  The old idea about nature being constant and able to return to its constant state after disturbance is based on a classical idea of stability — the stability of a machine, like the pendulum of an antique grandfather clock.  Once set in motion, the pendulum goes back and forth, but gradually friction slows it down and it comes to rest exactly where it started.

One of the things that makes it hard to accept the view of environment and ecosystems as out-of-steady-state and part of non-steady-state systems is that we haven’t had ways to think about how such systems change over time.  To make that possible, years ago I and my colleague Matthew Sobel — an applied mathematician, economist, and William E. Umstattd Professor at Operations Research at Case Western Reserve University — wrote a paper called “Stability in Time-Varying Ecosystems.”  (The paper was originally published as Botkin, D.B. and M.J. Sobel, 1975, “Stability in time-varying ecosystems” in  American Naturalist 109: 625 - 646.)

Briefly, we coined and defined two new terms for ecological systems that insist on changing all the time: persistence and recurrence. Instead of expecting an ecosystem, say of tundra near Barrow Alaska, or a population, say of polar bears, to remain constant, we expect instead that their numbers will vary, but within a certain range. This means the bear population will persist within certain limits, an upper and a lower number.  We call this persistence within bounds.  If we take actions that we think might harm the polar bear populations, we can check if there is an effect by comparing its past persistence with current ranges of variation.  (That is, of course, if we have the data to do this.  If we don’t, we’re out of luck as scientists and our management of polar bears lacks an important scientific base, but that’s another story.)

Recurrence is similar.  If an ecosystem or population is recurrent, then the condition it is in now will occur again in the future.  If a population is declining and on its way to extinction, its current population size is nonrecurrent.  Here’s another example.  In 1938 there were only 18 whooping cranes, and there was concern that this species would go extinct, and steps were taken to protect their habitat — their wintering grounds at Aransas National Wildlife Refuge, Texas and their summering grounds at Ramsar Wetlands in northern Canada.  This helped their population to increase greatly, and by 2007 scientists counted 237 at Aransas.  We who admire these cranes hope a population low of 18 never recurs — the population never gets that low again, but that 400 or even more could.

Tipping points don’t work for non-steady-state ecological systems, because they are always changing, kind of sloshing around from one condition to another, and they don’t really have cliffs to fall off of.  Life has persisted on Earth for about 3.5 billion years, during which it has evolved, changed, and adapted to changes many times.  Indeed, many of the changes life has adapted to were brought about by life itself, which has altered the environment locally and globally, adding to that sloshing among system states. Living things and their ecological systems do change a lot.  We can talk about changes that we like and those we don’t like, changes we consider natural or unnatural, but speaking of these as tipping points gets us off the track, away from how these things really work, and interferes with understanding what we could do, want to do, and even should do.

These are the general ideas.  If you want to get into the details, please read Matt Sobel’s and my paper.  Meanwhile, realize that tipping points only happen to steady-state systems, and our environment and ecosystems are not that kind.  There are many helpful ways to consider and discuss the possible effects of global warming.  Tipping points is not one of them.