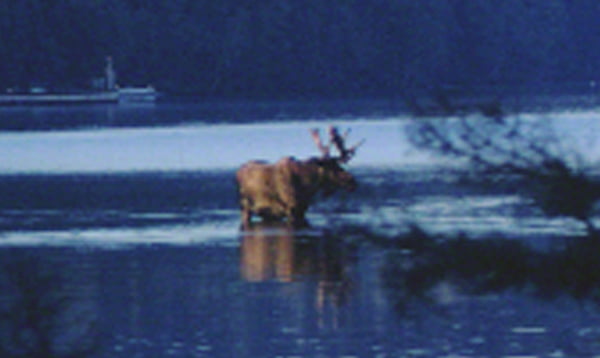 One pleasant June evening years ago, I took a break from ecological research at Isle Royale National Park and went canoeing in a large inlet named Washington Harbor, hoping to see some of the moose populating that isolated wilderness island in Lake Superior. Upstream, an old cedar arched gracefully over the waters, framing the forest and the deepening sky beyond.

The serenity and beauty of the scene rivaled the best of America's landscape painting. For that moment, the remote island wilderness appeared as tranquil as a still-life, as permanent in form and structure as brush strokes on canvas at the Louvre.

Soon after I had pushed out from shore, a large bull moose stepped carefully into the cold lake waters and began a slow traverse of the shallows, searching for water irises, lilies and other water plants that were some of his favorite summer foods. He circled the shallows for 20 minutes, rarely stopping to feed. In this northern wilderness, June was too early for water plants, and as the moose edged his way over to the north shore, he found little to eat. Suddenly, he galloped through the shallows, scrambled out of the inlet, and began kicking vigorously at the shore. He dashed up a short bluff, breathing rapidly, turned, raced down and kicked again where the sand and waters met. It was as if he were furious with the harbor for denying him food, but I never did understand why he acted that way.

Nothing could have contrasted more with the idyllic scenery of that evening than the moose's bizarre, chaotic and perplexing behavior. But in the almost half-century that I have studied nature's character, I have come to realize that the seeming constancy of the harbor symbolized a false myth about nature, while the moose that kicked at the shore—complex, changeable, hard to explain, but intriguing and appealing in its individuality—was closer to the true character of biological nature, with its complex interplays of life and physical environment on our planet.

With the Copenhagen climate conference drawing to a close, and the perhaps-compromised science of global warming everywhere in the news, the big bull moose came to mind as a reminder of the difference between the way much of environmental science has been approached and the way nature actually works.

Most of the major forecasting tools used in global-warming research, including the global climate models (known as general circulation models of the atmosphere) and those used to forecast possible ecological effects of global warming, paint a picture of nature more like a Hudson River School still-life than like the moose that kicked at the shore. These forecasting methods assume that nature undisturbed by people is in a steady state, that there is a balance of nature, and that warnings the climate is at a tipping point mean that the system is about to lose its balance.

In fact, however, nature has never been constant. It is always changing, and life on Earth has evolved and adapted to those changes. Indeed many species, if not most, require change to persist. So there is something fundamentally wrong in most approaches to forecasting what might happen if the climate warms. The paradigm is wrong and has to change. But such fundamental change in human ideas never comes easily, and it is often resisted by those whose careers have been based on the old way of thinking. In addition, the general circulation models are such complex computer programs, and have been developed over so many years, that a fundamental change in the entire way of thinking about climate dynamics and its ecological implications is all the more difficult.

The recently revealed emails from the East Anglia Climate Research Unit, better known as "Climategate," illustrates the difficulty of letting go of old, perhaps flawed methods. We who work in environmental sciences and on global warming need to open ourselves to a much greater variety of ways of thinking about nature. We need to develop forecasting methods that are appropriate for always-changing, non-steady-state systems where chance— randomness—is inherent.

Among the various things I have tried over the course of four decades of work on the effects of global warming were a few computer models of the carbon-dioxide cycle, small computer programs, taking quite different approaches than the standard at the time to the question of what might happen if carbon dioxide were to increase rapidly from human actions. I created a strange little model of little boxes, each representing what we ecologists call "biomes"—major ecosystems on Earth, like all tropical forests. These "competed," so to speak, for CO2 in the atmosphere through their photosynthetic organisms, and returned some of that CO2 back to the atmosphere as the model's "creatures" respired or died and decayed.

The results were as strange and surprising to me as the moose who kicked at the shore. The CO2 in the atmosphere didn't just build up over hundreds of years and then slowly decline to the same perfect equilibrium concentration in the Earth's atmosphere prior to the industrial age. No, instead it oscillated strangely, because the biome that had the fastest rate of uptake "out-competed" the others, pulling the CO2 concentration down so far that the plants and algae in other biomes didn't have enough and died back, giving up their stored CO2 to the atmosphere.

That strange little computer model was at the time just as ephemeral for me as that evening canoe ride at Isle Royale. It got me thinking about how a complicated, intricate, always-changing system could respond to a novel input. The computer, caring even less about me than did the bull moose, simply showed me exactly what the consequences of my assumptions were.

I didn't publish that work because it was so simple, yet different, and seemed more a personal insight than a definitive forecast. But looking back now at the bull moose and that little computer model, I believe that we have been on the wrong path in our view of the way nature works, and we need a fundamental change in our paradigm.

This can come about only in an intellectual atmosphere that is open, free, and wildly experimental. It would be an atmosphere that let us accept that natural ecological systems are likely to be full of surprises, like a moose kicking at the shore.

And once we open ourselves to those possibilities, perhaps we won't find ourselves caught between defending weak science or lashing out, like that bull moose, and kicking at what seems to stand in our way.