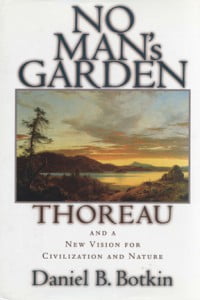 With the London Olympics in full swing, and the always amazing track and field events about to get underway, I was reminded of a summer race of a different kind.

This race took place 155 years ago today, on August 1, 1857, and involved none other than Henry David Thoreau—hardly an Olympian, but still someone who enjoys a good contest.

The story of Thoreau’s race in the Maine Woods below is an excerpt from my book, No Man’s Garden: Thoreau and a New Vision for Civilization and Nature (Island Press, 2001.) Quotations from Thoreau are from The Maine Woods, edited by Joseph J. Moldenhauer (Princeton University Press, Princeton, N.J., 1973 2nd edition, pp. 285-286.) I’m excited to announce that No Man’s Garden will be available as an ebook for the first time later this fall.

Here’s to the camaraderie of athletic competition and the spirit of the Games!

CHAPTER V RACING IN THE WILDERNESS

On August 1, 1857, Henry David Thoreau, his traveling companion from Massachusetts Ed Hoar, and Joe Polis, their Indian Guide, went down a river in their canoe. They portaged about three quarters of a mile, around the falls, where the “rocks were on their edges, and very sharp,” Thoreau wrote. “When we had carried over one load, the Indian returned by the shore, and I by the path, and though I made no particular haste, I was nevertheless surprised to find him at the other end as soon as I. It was remarkable how easily he got along over the worst ground.”

As a result, Thoreau and Polis decided on a race. “He said to me,” wrote Thoreau “I take canoe and you take the rest, suppose you can keep along with me?” Then Thoreau explained that “I thought that he meant, that while he ran down the rapids I should keep along the shore and be ready to assist him from time to time, as I had done before; but as the walking would be very bad, I answered, ‘I suppose you will go too fast for me, but I will try.’”

“But I was to go by the path, he said. This I thought would not help the matter, I should have so far to go to get to the river-side when he wanted me. But neither was this what he meant. He was proposing a race over the carry, and asked me if I thought I could keep along with him by the same path, adding that I must be pretty smart to do it. As his load, the canoe would be much the heaviest and bulkiest, though the simplest, I thought that I would be able to do it, and said that I would try. So I proceeded to gather up the gun, axe, paddle, kettle, frying-pan, plates, dippers, carpets, etc., etc., and while I was thus engaged he threw me his cowhide boots.”

“’What, are these in the bargain?’ I asked. “‘Oh, yer,’ said he; but before I could make a bundle of my load I saw him disappearing over a hill with the canoe on his head, so, hastily scraping the various articles together, I started on the run, and immediately went by him in the bushes, but I had no sooner left him out of sight in a rocky hollow, than the greasy plates, dippers, etc., took to themselves wings, and while I was employed in gathering them up again, he went by me; but hastily pressing the sooty kettle to my side, I started once more, and soon passing him again, I saw him no more on the carry. I do not mention this as anything of a feat, for it was but poor running on my part, and he was obliged to move with great caution for fear of breaking his canoe as well as his neck. When he made his appearance, puffing and panting like myself, in answer to my inquiries where he had been, he said, ‘Rocks (locks) cut ’em feet,’ and laughing added, ‘Oh, me love to play sometimes.’

Polis told Thoreau that he and his companions often held such informal races. Meanwhile, as a result of the race, Thoreau noted that “I bore the sign of the kettle on my brown linen sack for the rest of the voyage.”