The Moon in the Nautilus Shell: Discordant Harmonies Reconsidered
From Climate Change to Species Extinction, How Life Persists in an Ever-Changing World

[For Immediate Release] In a world constantly confronted by global environmental problems, establishing effective ecological policies based on sound scientific principles, free from ideological and political influence, is vital. Our natural ecological systems are constantly changing and our plans, policies, and laws governing the environment must change to reflect our new understanding.

These are key messages from THE MOON IN THE NAUTILUS SHELL by Daniel Botkin (Oxford University Press, September 14.) Poised to be a core text of the twenty-first century environmental movement, The Moon in the Nautilus Shell challenges us to think critically about our role in nature, expanding upon the ideas put forth in Botkin's groundbreaking Discordant Harmonies (1990), a book considered by many to be the classic text of the environmental movement.

At the time, Botkin was among the first to challenge the then dominant view that nature ideally exists in a state of perfect balance, remaining constant over time unless disturbed by human influence. He argued that nature has no ideal state of balance, but is instead constantly evolving and fluctuating. It is critical to the success of our future initiatives that we acknowledge this fact.

And yet, in The Moon and the Nautilus Shell, Botkin warns that a belief in a balanced nature is alive and well. Despite scientific data to the contrary and a general scientific awareness of geological time and evolutionary processes, the assumption of a steady-state environment persists in our policies for biological conservation and environmental management.

Botkin explains that while our technologies and sciences have moved beyond the nineteenth century insights, “our perceptions of nature and the science of ecology, which attempts to explain and interpret nature, have lagged behind. He writes, “In some fundamental ways, ecology remains a nineteenth-century science, which continues to lead us into failures in the management of natural resources and to unsettling contradictions in our beliefs about nature and therefore about ourselves.”

Additionally, Botkin, a lifelong naturalist, writes passionately about the pull and importance of our personal, spiritual—or non-rational—response to nature, and about the effects that myths and folkways have on our thoughts about the natural world. But he also warns of the dangers inherent in confusing the rational and non-rational responses, whereby we allow the inner personal to determine what we tell ourselves are rational decisions and actions.

Far from a science textbook, The Moon in the Nautilus Shell includes lush passages about the role of science and the environment in our lives. As historian and ethnologist John Bockstoce notes, “this magisterial and beautifully written work weaves together threads from many disciplines -- from folkways and mythology and classical texts to the best of modern environmental science. Botkin tells it like it is, always objective, always fair, always tied to the facts."

Most importantly, The Moon in the Nautilus Shell brings Botkin's ideas into the twenty-first century for a new generation of readers. Like Discordant Harmonies before it, this book will challenge us to rethink our current conservation policies and to more fully appreciate the complexities of the world in which we live. As Botkin states so eloquently in The Moon in the Nautilus Shell:

“Wherever we seek to find constancy, we discover change. The old idea of a static landscape, like a single musical chord sounded forever, must be abandoned, for such a landscape never existed except in our imagination. Nature undisturbed by human influence seems more like a symphony whose harmonies arise from variation and change over every interval of time. We see a landscape that is always in flux, changing over many scales of time and space, changing with individual births and deaths, local disruptions and recoveries, larger-scale responses to climate from one glacial age to another, and to the slower alterations of soils and yet larger variations between glacial ages.”

“Solving environmental problems calls for candor—which is the beauty in the stories here. They are indeed earnest, and elegantly written.”-- Alfred Runte, author of National Parks: The American Experience

"I can't think of another author who has had so great an impact on natural resource management as Daniel Botkin.” -- Kerry Fitzpatrick, Wildlife Ecologist, Michigan Department of Natural Resources

Daniel Botkin is a scientist who studies life from a planetary perspective, a biologist who has helped solve major environmental issues, and a writer about nature.

Botkin is a professor (emeritus) in the Department of Ecology, Evolution, and Marine Biology at the University of California, Santa Barbara. He joined the UCSB faculty in 1978 and was chairman of the Environmental Studies Program from that year to 1986. Professor Botkin remained on the faculty in that program and in Biology until 1999, when he became emeritus.

Well known for his scientific contributions in ecology and environment, he has also worked as a professional journalist and has degrees in physics, biology, and literature. His books and lectures show how our cultural legacy often dominates what we believe to be scientific solutions.
In addition to his career as an ecologist, Dr. Botkin has maintained a lifelong interest in folklore and folkmusic, serving on the board of directors of the Folklife Center of the Library of Congress from 2004 to 2010. “There is a connection,” Botkin explains of the seemingly disparate worlds. “For starters, a lot of what is said about nature is folklore, not science.”  For more information, go to www.DanielBBotkin.com

In addition to Discordant Harmonies (1990), his previous works include: 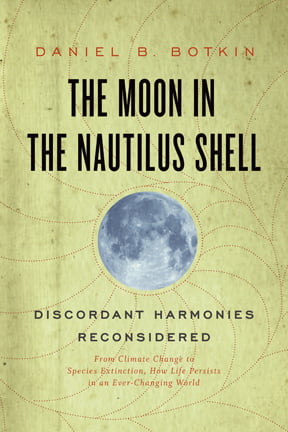 The Moon in the Nautilus Shell:
Discordant Harmonies Reconsidered