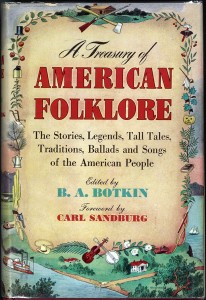 With my new book available just this past week, The Moon in the Nautilus Shell, it seems a perfect time to celebrate another book by a different Botkin, the American classic, A Treasury of American Folklore by my father, Benjamin Botkin.

It was a wonderful honor to learn recently that my father's book was selected as one of the first group of books for the Books That Shaped America exhibition by the Library of Congress.

Curators and experts from throughout the Library of Congress contributed their choices for the list. According to Librarian of Congress James H. Billington, the list of ‘Books That Shaped America’ is a starting point. "The list is intended to spark a national conversation on books written by Americans that have influenced our lives."

My father Benjamin headed the Library of Congress’s Archive of American Folksong (now the American Folklife Center) between 1943 and 1945 and previously served as national folklore editor of the Federal Writers’ Project (1938–39), a program of President Franklin Roosevelt’s New Deal during the Depression.

My father was passionate about folklore and role it played in society, and went against the prevailing ideas of many folklorists at the time when he argued that folklore was relevant in the present and not simply limited to historical study. He believed in the always-evolving state of folklore, and that folkore was always in a state of creation by people going about their daily lives. Though his viewpoints about folklore are now widely accepted, they were quite controversial at the time, inviting criticism and heated debate.

From my childhood, I have fond memories of my father and his fascinating group of friends that used to visit us at our house at 45 Lexington Drive in Croton-on-Hudson, New York. Friends such as Woody Guthrie and Pete Seeger, and the folklore historian Alan Lomax, among many, many others. You can read some of those memories, about Woody Guthrie specifically, from an earlier post.

Both my sister, Dorothy Rosenthal, and I are very proud of my father's incredible legacy, and honored by the inclusion of A Treasury of American Folklore in the Books That Shaped America exhibition with such a distinguished group of authors and titles.

The "Books That Shaped America" exhibition will be on view from June 25 through Sept. 29 in the Southwest Gallery, located on the second floor of the Thomas Jefferson Building, 10 First St. S.E., Washington, D.C., from 8:30 a.m. to 4:30 p.m. Monday through Saturday.