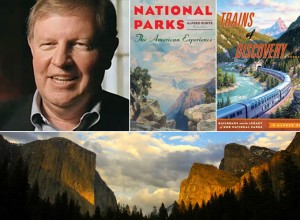 This episode of Renegade Naturalist Radio features Alfred Runte, the author of National Parks: The American Experience and an expert on the meaning of protected landscapes (audio player above.)

In the interview, Runte discusses the ongoing debate about the appropriate use of national parks by visitors as described in the Organic Act, written by Frederick Law Olmsted, Jr. in 1916, including the recent controversy over recreational use of snowmobiles in Yellowstone National Park.

"The controversy that has always simmered here this past century ever since the national park service was established back in 1916, is what is the primary purpose of the national park?…The preservation clause of the National Parks Service Organic Act says we are to leave these places unimpaired for the enjoyment of future generations and yes, we are to enjoy them--that means we are to be allowed into them--but that is the second principle behind the first principle which is the preservation of the wildlife and the scenery therein…Anything that is not principally associated with the enjoyment of the resource should not be allowed inside the National Park."

Runte most recently advised Ken Burns and Dayton Duncan during the production of Emmy Award-winning PBS series, The National Parks: America's Best Idea, and appeared in all six episodes of the program.

Now in its fourth edition, National Parks: The American Experience, continues to guide conservationists around the world in the establishment and management of protected lands. He is also the author of Trains of Discovery: Western Railroads and the National Parks, and Yosemite: The Embattled Wilderness.

Alfred Runte was born and raised in Binghamton, New York, in the upper Susquehanna River Valley. At nineteen the youngest board member of the Susquehanna Conservation Council, he fought to preserve the river while earning his B.A. from Harpur College of the State University of New York at Binghamton (now Binghamton University). His Ph.D. is from the University of California at Santa Barbara, where he helped build the Environmental Studies Program. A childhood camping trip from coast to coast (the family covered 10,000 miles) inspired Al's resolve to write about the national parks. Later, Runte's hands-on research included four years as a seasonal ranger in Yosemite National Park.

Of Runte, Ken Burns said, "Like John Muir, Alfred Runte has felt the siren call of our saved-and sacred-places, and, like John Muir, he has found a way to share their glories with power and poetry."