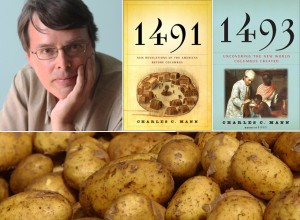 This episode of Renegade Naturalist Radio features journalist and bestselling author Charles C. Mann, author of 1491: New Revelations of the Americas Before Columbus, followed in 2011 by 1493: Uncovering the New World Columbus Created (audio player above.)

In addition to his immensely popular and highly readable books, Mann is also a correspondent and contributing editor for Science, Atlantic Monthly, and Wired magazines, and writes for several other publications. In his most recent books, Mann has analyzed the voyage of Christopher Columbus and the birth of globalization in terms of world trade and ecological collision.

In this interview, Mann talks about the voyage of Christopher Columbus and the birth of globalization in terms of world trade and ecological collision and his ability to write accessible books that tackle important environmental topics. About his writing style, Mann explained to Botkin that he takes a different approach to his subject matter than other, more academic tomes.

"I think it goes right back to Aristotle, who said that there are two ways to explain a subject: One is in terms of the subject itself, and that would be like a physics textbook or a geometry textbook where you start from the actions. The other is in terms of how people come to know about something. Often, I'll take the tack of trying to explain something in terms of how it came to be known."

Mann is also the co-author of The Second Creation: Makers of the Revolution in 20th-Century Physics; The Aspirin Wars: Money, Medicine, and 100 Years of Rampant Competition; Noah's Choice: The Future of Endangered Species and @ Large: The Strange Case of the Internet's Biggest Invasion. In 2006, 1491 received the U.S. National Academy of Sciences' Keck Award for best book of the year.

Dan spoke to Mann from his home in Amherst, Massachusetts.