I have written for more than 20 years that we need to move away from the ancient myth of the balance of nature---the idea that nature, undisturbed by people, is constant. This idea has formed the premises for many environmental  laws and policies. Recently, some of the major U.S. Environmental organizations have expressed the need to move away from this ancient myth, a very positive, constructive move.  Some of my scientific colleagues ask why I continue to write about this myth, because, they claim, scientists no longer believe it.

But  the balance of nature is still a powerful idea, especially in the media and in laws, policies, and international agreements. And although many scientists deny it, the idea is still prevalent among environmental scientists.

Here are some from environmental scientists:

In this article, Jim Hansen, the well-known former NASA scientist, and his colleagues wrote that the “realization that today’s climate is far out of equilibrium with current climate forcings [energy imbalances, to put the term simply] raises the specter of ‘tipping points,’ the concept that climate can reach a point where, without additional forcing, rapid changes proceed practically out of our control.”   The assumption here is that prior to human activities, the current climate would have been in equilibrium with the “forcings,” meaning that the climate was in steady-state with its energy inputs and outputs, therefore in one kind of a balance of nature, and that this has been changed by our actions.  But the climate has always been changing, it has never been in steady-state, never had that balance of nature.  The energy sources and sinks change continually (for example from day to night), and the climate is always adjusting to those changes.  Tipping points also imply that the system has a steady-state condition and can be forced from it.  But again, if the climate is never in equilibrium--- never in a balance of nature --- then it cannot have this kind of formal, mathematical “tipping point.” 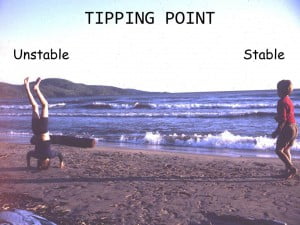 Stable and unstable systems are important ideas when it comes to climate and to all ecological systems.  Here's an illustration that demonstrates a very unstable and a very stable system.  That's my daughter standing on her head and my son walking.  In this picture, they are on the north shore of Lake Superior  Which is Earth's climate like?  Read on.

This is generally a good article, explaining that as freezing temperatures are not occurring as far south in Florida as in the past, because of the long-term climate warming, mangroves are moving north. “Along a 50-mile stretch of the central Florida coast south of St. Augustine, the amount of mangrove forest doubled between 1984 and 2011,” the article explains. Mangroves, which grow along ocean and sea coasts, are important habitat for many species, including fish and shellfish of commercial value. Around the world mangrove wetlands have been decreasing because of human developments, so this increase is a good thing from this perspective.  The article correctly explains that mangrove forests “are among the earth’s environmental treasures, serving as spawning grounds and nurseries for fish and as habitat for a wide array of organisms.”

But then the very idea that living things are changing their geographic distribution disturbs some scientists.  The article quotes Dr. Daniel S. Gruner, a biologist at the University of Maryland and one of the authors of the study, saying  “‘I don’t like to think about it, quite frankly,” he said. 'It’s a little scary.’ ”

But one of the best documented things about Earth’s vegetation is that it is always responding to climate change, moving north and south as the climate warms and cools.  Paleoecologists have reconstructed the huge migrations of major plant species in Europe and North America during the last four ice ages and interglacial times. I discuss this in my book The Moon in the Nautilus Shell.

For example, hemlock, one of the important trees of the northeastern United States, survived during the last ice age in a refuge far to the south, and then started moving northward about 12,500 years ago.  According to Prof. (Emeritus)  Margaret Davis, University of Minnesota, one of the pioneers and world experts in paleoecology, hemlock appears to be still moving north as a result of the end of the last major ice age — its seeds don’t get moved quickly and it is still readjusting to those ancient climate changes.  This is completely consistent with Darwinian evolution and with modern ecology.  It’s not scary, it’s just plain natural.  But the fear of change evokes a deep-seated desire of environmental constancy.  That is to say that at one level,  Dr. G seems to wish for a balance of nature, without using the term.  It’s a very human emotion.  Down deep, most of us wish for a world that is the way we remembered it.  But that’s not how nature works.

Here are some examples from the media:

A DECEMBER 21, 2013 NEW YORK TIMES ARTICLE, Setting the Table for a Regal Butterfly Comeback, With Milkweed


In an otherwise nice article about efforts to help the Monarch Butterfly population increase, this article states "Scientists allow that neither the butterfly nor its migration is crucial to the balance of nature."  The  term "balance of nature" is written as an assumed entity, with a reality, which we must all know about.  Perhaps in this case the term is being used in the same casual way that "ecosystem" is applied now to almost every kind of organization. Both have become part of our folklore, in the terms my father, Benjamin A. Botkin, wrote about folklore in modern societies, in A Treasury of American Folklore (listed by the Library of Congress as one of hundred books that shaped America).

The problem here is how to get the modern scientific understanding of ecology across, when a term which had a definite scientific meaning and has been shown to never have existed, becomes a common folklore term, so that a meaning, which does not exist in nature, is implied.  It's as if the Times would suddenly begin referring to Ptolemy's equations (150 A.D. ) for the motion of planets, disproved by Copernicus (1473 - 1543 A.D.).

The New York Times article can be found at http://www.nytimes.com/2013/12/21/us/setting-the-table-for-a-fluttering-comeback-with-milkweed.html?hpw&rref=us&_r=0

A DECEMBER 1, 2013 NEW YORK TIMES ARTICLE, IN NEW JERSEY PINES, TROUBLE ARRIVES ON SIX LEGS  repeats the balance of nature myth. The article is about the current infestation of southern pine beetles, which are damaging the famous Pine Barrens forests of southern New Jersey.  The author, Justin Gillis, writes that "scientists say is almost certainly a consequence of global warming" and that "Scientists say it is a striking example of the way seemingly small climatic changes are disturbing the balance of nature."  (You can find that article at http://www.nytimes.com/2013/12/02/science/earth/in-new-jersey-pines-trouble-arrives-on-six-legs.html?_r=0)

Yes, we are living in a warming trend, but the primarily human failure in the Pine Barrens has been the long-term intentional suppression of fire---the Smokey Bear "only you can prevent forest fires" idea --- and suppression of selective logging.  Pine Barrens are subject to frequent natural fires; vegetation has evolved and adapted to these. When I was studying for my PhD in ecology, my major professor, plant ecologist Murray Buell (one time President of the Ecological Society of America) loved to go to the Pine Barrens, because the frequent fires on the barrens' poor sandy soil produced miniature forests, in some places burning so frequently that the trees never got much taller than we were.  And in other areas, pines, oaks, and in wetlands Atlantic white cedar grew well. Since European settlement of the area, commercial forestry had been a major activity, and continues today.  But in areas where the fires are suppressed and prescribed fires and logging generally not allowed , these forests become dense with trees of many conditions, including many dead and dying that are good habitat for the beetles.  Although a warming climate may have helped a harmful beetle come to the barrens, it is misdirected management that created a forest so susceptible to its attack.

This is another example where understanding how forest ecosystems actually work --- always dynamic, always changing, with species evolved, adapted, and requiring change --- benefits the environment and us.

FISHERIES AND THE BALANCE OF NATURE BELIEF

Here's another example that shows that the balance of nature idea is still in use, in the quotation from the European Unions' Commission on Fisheries.

EU fishing rules
Multi-annual plans set clear goals for sustainable management of specific stocks and map out the path to achieving them. They are used to keep exploitation of fish stocks at the level that gives the highest yield in the long run – a concept usually referred to as 'maximum sustainable yield ' (MSY)– and to rebuild overfished stocks.  Each multiannual plan is based on a harvest control rule that is tailor-made for the fishery in question. This is a simple mathematical formula which converts quantifiable scientific data into proposed catch and effort limits for the coming year.

What is a Maximum Sustainable Yield?

Maximum Sustainable Yield is a concept that comes out of the logistic growth equation, which says that a population, undisturbed by people, will grow to a fixed carrying capacity and its abundance will stay at that carrying capacity forever.  A "logistic" population reaches its maximum growth rate when its population is exactly at one half of it carrying capacity.   The logistic has no environmental variables.  As applied in standard fisheries management models, the only variable is the amount of human harvest. The logistic curve is therefore a mathematically explicit statement of the ancient balance of nature idea, which goes back to the ancient Greek philosophers, that nature undisturbed achieves a constancy.  As I show in The Moon in the Nautilus Shell and showed 23 years ago in Discordant Harmonies, no data about any aspect of the environment follows the logistic curve.  Nature in all its characteristics --- climate, oceans, ecosystems, species, populations, is always changing.  There are well known mathematical methods that can deal with such varying systems, and they should be applied instead of the maximum sustainable yield and its mathematical basis. 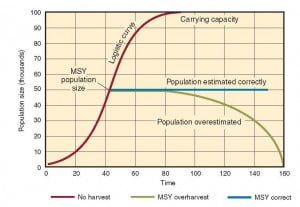 We can do a lot to save the world's fisheries.  One of the first steps is to begin to use realistic forecasting methods.