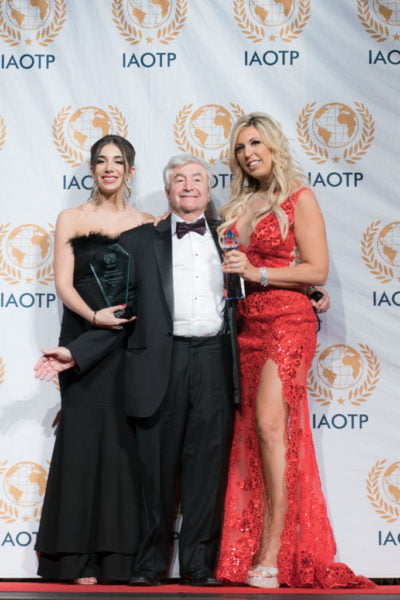 While inclusion with the International Association of Top Professionals is an honor in itself, only 1 person is selected as Environmental Scientist of the Decade. Dr. Botkin will be honored at IAOTP’s annual awards gala at the end of this year at the NYC Plaza Hotel for this distinction and he was honored in Las Vegas at the Bellagio Hotel for his selection as Top Environmental Scientist of the Year and he received the Lifetime Achievement Award by IAOTP. www.iaotp.com/award-gala

Dr. Botkin is being recognized with this distinction for having over 5 decades of professional experience in Biology and researching the possible effects of climate change on biodiversity. Dr. Botkin has certainly proven himself as an extraordinary professional, pioneer and expert in the field. Dr. Botkin is a dynamic, results-driven leader who has demonstrated success not only as a Biologist and Ecologist, but with every position he has ever held. His impressive repertoire of other roles include Serving as the previous Chairman of the English Department of the newly formed Mindanao State University (among seven faculty members in the department, all American Peace Corps Volunteers), Dr. Botkin taught English and introductory physics. He is credited for writing and creating the first successful multispecies computer ecology called JABOWA, with two scientists from IBM Thomas J. Watson Laboratories back in 1970. Dr. Botkin helped establish and has led the National Science Foundation’s Long-Term Ecological Research Program and he initiated NASA’s use of satellite remote sensing to study ecology from space. As an international voice in the scientific community, Dr. Botkin has also advised the government of Taiwan in solving environmental problems. For his studies on endangered species, Dr. Botkin has traveled the globe in order to complete his extensive field research in various wilderness areas including Alaska, California, Michigan, as well as in other nations including the Soviet Union’s Siberia and the African Plains in Kenya, Zimbabwe, South Africa. This research involved helping to save endangered species, ranging from California condors to African Elephants and to Bowhead Whales. He used historical information to recover wildlife population sizes and sea ice changes. He is regarded by his peers as one of the world’s most influential and best Ecologists and Biologists of his time.

Dr. Botkin received his BA in Physics from the University of Rochester, his Master’s in English Literature from the University of Wisconsin, and his Ph.D in Biology from Rutgers University. Stephanie Cirami, President of IAOTP stated, “Choosing Dr. Botkin for this honor was an easy decision for our panel to make. Dr. Botkin’s numerous accomplishments, awards and accolades are extremely impressive. He has tremendous foresight, extensive knowledge, is brilliant at what he does and was exactly what we were looking for. We are truly honored to have him as our Top Environmental Scientist of the Year and now receiving the Lifetime Achievement Award. We are excited to celebrate his success at this year’s gala.”

Throughout his illustrious career, Dr. Botkin has received numerous awards and accolades and has been recognized worldwide for his outstanding leadership and commitment to the profession. For 2019 he graced the front cover of TIP (Top Industry Professional Magazine), and was interviewed on TIP Radio. He was chosen as Top Environmental Scientist of the Year and for the Lifetime Achievement Award by the International Association of Top Professionals (IAOTP) and was featured in the Wall Street Journal. In 2017 he was the recipient of the Albert Nelson Marquis Lifetime Achievement Award given by Marquis Who’s Who and has been featured in numerous publications including Marquis’Who’s Who. He is a recognized Fellow of the American Institute of Biological Sciences and Teachers and Academic Textbook Association. In 2012, he received the Santa Barbara Botanic Garden, John C. Pritzlaff Conservation Award and in 2004 selected to receive the Texty Award for Best Biological Sciences Textbook from the Textbook and Academic Authors Association. He was also the recipient of the Bernhard Eduard Fernow Award for Outstanding Contributions to International Forestry; Mitchell International Prize for Sustainable Development; and inducted into the Environmental Hall of Fame. Dr. Botkin founded a nonprofit corporation named, “The Center for the Study of the Environment,” and he is an esteemed member of several prominent organizations including the Explorers Club, Cosmos Club, AAAS, Sigma Xi, American Institute of Biological Sciences, Ecological Society of America, Advisory Council to the Urban Ecosystems Journal, Trustee of the Santa Barbara Botanic Garden, and Commissioner for the US National Commission for UNESCO, just to name a few.

Aside from his successful career, Dr. Botkin is a sought after speaker, presenter, lecturer, journalist, and published author. Some of his most recent publications include his first novel “Tsavo: Oddball Researchers Use Data and Guns to Save African Elephants”; and 16 nonfiction books, including:“Twenty-five Myths that are Destroying the Environment,” “Environment Science: Earth as a Living Planet, (9 editions),” “Discordant Harmonies: A New Ecology for the 21st Century; Strange Encounters, Adventures of a Renegade Naturalist; “Powering the Future: A Scientist’s Guide to Energy Independence” and “Essential Environmental Science, 1st Edition.” As an invited speaker at numerous conferences and institutions, he was named a Distinguished Visiting Scholar at Green Mountain College, Annual Distinguished Visiting Scientist with the Long Beach Aquarium, and Astor Lecturer at Oxford University, Great Britain. Dr. Botkin has been continually praised for his unique perspective to his subject. His books and lectures examine the effects our cultural legacy has had on determining what we believe to be scientific solutions and in addition he discusses the roles of scientists, businessmen, stakeholders and government agencies have when reaching new approaches to environmental issues.

Looking back, Dr. Botkin attributes his success to his education, mentors he has had along the way, and his endless passion for helping the environment. He says his work is very gratifying and hopes that others will consider a career in Biology and Environmental Science. When not working, he enjoys spending time with his family, traveling, photography, and playing folk music guitar. For the future, he hopes that his research and continuous efforts will enlighten and inspire people to serve and protect the environment and animals.

The International Association of Top Professionals (IAOTP) is an international boutique networking organization who handpicks the world’s finest, most prestigious top professionals from different industries. These top professionals are given an opportunity to collaborate, share their ideas, be keynote speakers and to help influence others in their fields. This organization is not a membership that anyone can join. You have to be asked by the President or be nominated by a distinguished honorary member after a brief interview.

IAOTP's experts have given thousands of top prestigious professionals around the world, the recognition and credibility that they deserve and have helped in building their branding empires. IAOTP prides itself to be a one of a kind boutique networking organization that hand picks only the best of the best and creates a networking platform that connects and brings these top professionals to one place.