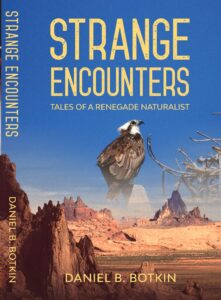 Two ways to buy the book

DIRECTLY FROM ME (PERSONALLY SIGNED COPY)

Contact me at dan@danielbbotkin.com and I will invoice you directly via PayPal. This way I can send a signed copy.
Price: $20.00

Traveling has been part of my life. I have worked for many decades trying to understand how nature works and trying to help solve environmental problems. I had some curious experiences. Often, the simplest facts I thought would be easiest to find eluded me. Sometimes people would get into debates and arguments that didn't seem to make sense and to hate each other unnecessarily. Sometimes people did things that were funny. I learned a lot from the human side of nature and wilderness. These experiences raise several questions. What can people expect of science when it is applied to the world immediately around them? What is the best that such science can do? What is it realistic to expect of such a science when it is done by human beings, with all our failings as well as our strengths? What is reasonable for such a science, and the scientists, to expect from the people, governments and other institutions that are supposed to oversee, manage properly, and improve our surroundings?

Here’s a short version of one of the stories in my book.

Avoiding Deer in the Fog

Joe, an ecologist, as expert on deer, was riding with Mike, a friend, in Mike's car. They drove into a thick fog. Suddenly, a deer dashed across the road in front of them, a quick ghostly movement barely missing the front grill.
"Better slow down," Joe said to Mike, "where there's one deer, there's usually others."

Mike slowed down. A few minutes later, a deer dashed out of the fog and ran into the side of the car, killing itself and doing severe damage to the door. If the car had not slowed down, the deer would have passed safely behind it. Joe understood deer well and his advice to Mike was based on that sound understanding. But understanding nature never leads to a perfect forecast.