Oddball Researchers Use Data and Guns to Save African Elephants

By Daniel B. Botkin
with Joan Melcher 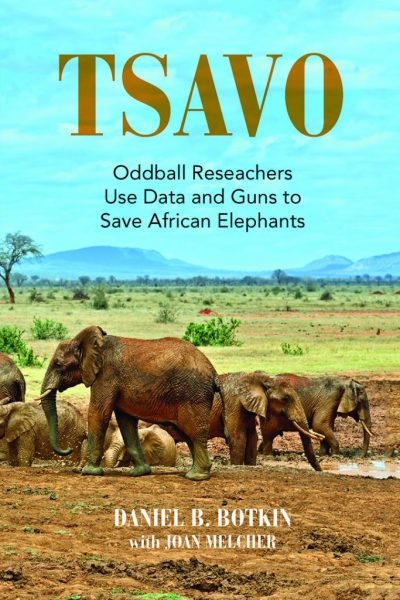 A small group of American and British scientists go to East Africa to try to save elephants from poachers and to find how many remain.  They end up fighting with poachers, large and small groups, who try to kill them, meanwhile being chased and threatened by elephants and having to shoot some to survive.

Using my firsthand knowledge of African elephants, African national parks, and the open plains and forests of east and southern Africa, to enrich the story and add just the right amount of detail.  Having had a career as an environmental scientists and another career as a professional journalist and book writer, this novel integrates these two backgrounds.

Although the bull elephant was fully a hundred yards away, he appeared to Elizabeth, watching from the backseat, the biggest thing she had ever seen. The thicket of small shrubs on each side of the dirt track where he emerged made him look even bigger. Not only was he tall, his head was massive and lumpy. The tip of one tusk was broken off, and one ear was torn. The defects only made him look more ominous. When he came out into the clearing - a long grassy swath the length of a football field - he stopped and stared at the Land Rover. Elizabeth was sure he could overturn the vehicle with ease and kill all of them in an instant. She assumed that Davie would pull off the track and let the big bull pass. But he didn't. He stopped on the path and turned off the engine.

"Show you what a jumbo's like when he gets mad," Davie said.

"I don't think I want to know," Mary replied meekly.

"Me either," Elizabeth said. She glanced at her watch. Ten o'clock.

Paul and Howie, next to her, stared silently. They might say something too, to get us out of here, she thought.

"They're int'restin'. Fascinatin'," Davie said. "Watch this old guy carefully." The big bull turned his body perpendicular to the line between himself and the Land Rover and walked at right angles to that line, moving his head vigorously up and down.

Davie laughed. "Oh, no he ain't. That's just the start, his first warning."

The elephant paced about thirty yards and then stopped. He turned, now off the track, and stared at the Land Rover.

The elephant watched silently. Elizabeth and the others sat riveted to their seats, partly in fear, partly in fascination.

"Pretty well-known behavior, is it?" Paul asked. "Seen it before?" Davie nodded. "Big motherfucker. Y'see," he whispered over his shoulder to the three in the back,  "if  he  came  straight  at  us,  now that'd be a direct threat. This way, he's showin' us his threat, but it ain't directly aggressive."

Paul, Howie, and Elizabeth,  squeezed  in  the  backseat,  shifted against each other, trying to see out. The brim of Howie's baseball cap pushed against Elizabeth's forehead and slid down against her eye. "Howie, for God's sake," she whispered. Howie grinned.

"You can feel that elephant's mood," Paul said,

"Worthy of Steven Spielberg or Marcel Camus, TSAVO is an adventure full of suspense, romance, and action."
--Library Journal

"The human drama is action-filled and engaging, but it is the elephants that will likely bring readers to tears."
--Kirkus Reviews

“Overall this was a thrilling read. The author managed to capture the struggle of animal and man alike in this entertaining and informative read. This book is the perfect read for anyone who is interested in conservation efforts, the environment or the history of our world and it’s animal kingdom populations overall. This book is even more relevant than ever today, with the current political climate even affecting big game hunting laws and imports regarding the ivory and trophy trade."
--Hollywood Book Reviews

Listen to the Publishers Weekly radio interview about Tsavo 11.12.2018 podcast.