Note: The Bockstoce and Botkin Historical Sea Ice Data Study has a new home at the University of Alaska website. The data include more than 52,000 daily observations in an unbroken 65 year record from 1849 - 1914. 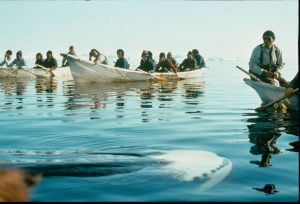 Bockstoce, J.R. and D.B. Botkin, 1980, The Historical Status and Reduction of the Western Arctic Bowhead While (Balaena mysticetus) Population by the Pelagic Whaling Industry, 1848-1914, Final report to the U.S. National Marine Fisheries Service by the Old Dartmouth Historical Society. 160 pp.


Abstract: From 1848, when the western Arctic whaling grounds were discovered, to 1914, when the whaling industry collapsed, the bowhead whales of the Bering, Chukchi and Beaufort Seas were systematically hunted by whaling vessels of several nations. this report attempts to determine the impact of the pelagic whaling industry upon the western Arctic bowhead whale. Data have been drawn from the logbooks and journals of the whaling industry representing 19% of all known whaling cruises made to those waters during the period. From these records we estimate that 18,650 whiles were killed and 16,600 were taken by the pelagic whaling industry, an average of about 280 whales killed and 250 whales taken per year. DeLury estimates of the bowhead whale population for 1847 (the year before the beginning of exploitation by the whaling industry) suggest that the population numbered approximately 30,000, and was no less than 20,000 and no more than 40,000. The population appears to have been depleted rapidly: one-third of the total number of kills during the entire period of commercial whaling occurred in the first decade, and two-thirds of them in the first two decades. The ships' records also suggest that the species was rapidly eliminated from major parts of its range.

The Harvest of Pacific Walruses by the Pelagic Whaling Industry, 1848 to 1914

Abstract: The most important agent in the historical reduction of the Pacific walrus (Odobenus rosmarus) population in the 19th century was the pelagic whaling industry. From 1848, when the whaling grounds of the Bering Strait were discovered, to 1914, by which time the industry had collapsed, whaling vessels made more than 2700 cruises seeking bowhead whales in the waters of the western Arctic. Large numbers of walruses also were taken during those voyages.

We present here the results of the first systematic attempt to determine the size of the pelagic whaling industry's walrus harvest. Our data are drawn from the best extant records: the logbooks of the whaling vessels. Our data indicate that in the course of their voyages, the whalers captured approximately 140,000 walruses.

Commercial Whaling in the North Pacific Sector
Chapter 14 of The Bowhead Whale by John R. Bockstoce and John J. Burns

Excerpt: Commercial bowhead whaling in the North Pacific sector focused on two populations: that of the Okhotsk Sea, which initially probably numerated about 3,000 whiles; and that referred to (in this book) as the Bering Sea population, which included perhaps as many as 23,000 animals (Chapter 10). The former was essentially confined to the Okhotsk Sea, which is entirely ice-free in summer. The latter may have had two subpopulations (Bockstoce and Botkin, 1983, Fraker 1984, Bockstoce 1986) with some whales formerly remaining in the Bering Sea during the ice-free summer, while most undertook extensive seasonal migrations into the eastern Beaufort Sea and then counterclockwise across the Beaufort and Chukchi seas, southeastward in the western Chukchi and into the Bering Sea where they wintered (Chapter 9).

Excerpt: The harvest of bowheads near shore and on the high seas using ships and industrial age techniques marked the beginning of the commercial exploitation of the bowhead whale, a period which, opened in the early 16th century near Spitsbergen (Jenkins 1921, Chapter 13), and in the mid-19th century in the Okhotsk and Bering seas (Scammon 1974, Chapter 14). How many bowheads roamed the seas just prior to those times? The purpose of this chapter is to review the history of attempts to answer that question and to present our interpretation of the current state of knowledge, in the end providing a minimum estimate of 50,000, which is consistent with existing information.

Excerpt: The midnight sun of May hung low on the northern horizon, washing the icefields in its viscous red light. The temperature was -10 degrees, and I shifted uneasily on the freight sled, trying to keep the wind from finding its way into the openings of my parka. Judging from their nervous movements, the six Eskimos seated beside me were equally unsuccessful in fighting the cold.

Excerpt: The International Whaling Commission claims there are too few. The Eskimos content there are enough. At stake is the survival of the whales and culture.

Excerpt: Of all the environmental issues being debated in Alaska today none is more potentially volatile than the question of the Eskimo bowhead whale hunt, for which a storm is brewing - and its winds will surely be felt in Washington D.C.

Abstract: The age of bowhead whales captured by Native Alaskan hunters in the Bering, Chukchi and Beaufort Seas has been estimated via chemical analysis of the eye lenses, and other techniques. The racemization-age estimates indicate that bowhead whales (Balaena mysticetus) have a lifespan of more than a century. 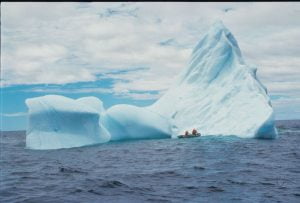