In a recent (May 22, 2013) Wall Street Journal article, Ted Nordhaus and Michael Shellenberger state that nuclear power “is the best chance we have to make big reductions in carbon emissions quickly.”  In fact, however, “quickly” is impossible.  A large number of new nuclear plants would have to be up and running in the next decade or two, but the design of conventional nuclear power plants is not fixed.  New designs are continually proposed to overcome newly discovered problems with existing plants, such as happened with the March 2011 Fukushima nuclear power plant disaster in Japan, in  attempts to improve safety, energy, and costs.  It takes a long time to design nuclear power plants, get government permits, and overcome public opposition, especially local opposition. The current track record suggests that we might expect one or two new nuclear power plants to be constructed in the next decade.  Even a major government subsidized effort to speed up construction, which would add to the costs, would have a low chance of provide much energy “quickly.”

Can We Fuel All Those Nuclear Power Plants?

Suppose it were possible to build as many of these plants as we wanted as quickly as we wanted.  Could we replace all fossil fuels with nuclear power? Suppose that we could use nuclear energy to make liquid and gas fuels to power vehicles, and could do this quickly using conventional nuclear power plants. As I show in my book, Powering the Future: A Scientist's Guide To Energy Independence, we would have to build enough plants to increase energy production by 17.4 times, which means using 1.2 million tons of uranium ore each year. At that rate of use, the known and affordable to mine reserves of uranium would be used up in less than five years.  Geologists estimate that there are about 35 million tons of uranium out there regardless of the cost of mining it (geologists call this identified resources). With nuclear power replacing all fossil fuels, even these would be used up in 29 years.  You might argue that this could change just the way things have changed with shale gas and oil. But those are biological products and their original deposition is subject to much more complex series of processes than uranium, which is a nonbiological order and a rare one found in well-known, specific kinds of rocks.  So it is unlikely that the estimate will get a lot higher.

The U.S. Dept. of Energy has published this map showing the locations of temporary radioactive nuclear waste storage facilities, in use until a permanent site is selected.  For many years, the intended site was Yucca Mountain, Nevada.  The site was prepared, but has never been put into use.  Considerable controversy has gone on for decades about whether this was a safe location.  Current news reports about this site can be found at http://www.yuccamountain.org/new.htm

Meanwhile, U.S. nuclear wastes are being stored at temporary facilities across the country, as this map shows.  I write about this problem in my book Powering the Future: A Scientist's Guide to Energy Independence, where I discuss the pros and cons of this site.  It is a very complicated issue. 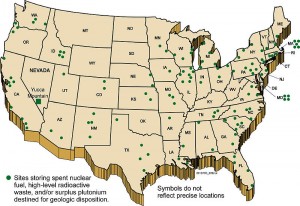 This Dept. of Energy map shows the locations of temporary radioactive nuclear waste storage facilities in the nation.  These continue to be in use into a permanent or several permanent depositories are selected.

What are the Real Costs of Operating a Nuclear Power Plant?

For the sake of argument, let's ignore the limitations for the moment and consider the real costs of operating a nuclear power plant. Nordhaus and Shellenberger use a nuclear power plant planned but not yet in operation in Finland as their example of what is cheaper than solar. They estimate that the not-yet-built Finnish nuclear power plant will produce electricity at 4 cents per kwh.  How realistic is that?

The U.S. Energy Information Agency (EIA) reports that in 2011 the average costs for fuel, operation, and maintenance was $0.0247 per kwh.   Construction costs for the Finnish Power Plant based on the energy produced as assumed over 20 years by Nordhaus and Shellenberger is $0.0476/kwh.  Summing these, the estimated costs based on construction and annual operation is 7 cents per kWh.  To this we have to add the cost of refueling, managing nuclear wastes, and dismantling the reactor at the end of its lifetime, all of which must be included for a realistic comparison of costs.

According to the Nuclear Energy Institute, a typical 1,000 megawatt (MW) reactor has to be refueled every 18 months, at a cost of about $40 million.  Therefore, the 1,800 MW Finnish reactor would need about $72 million every 18 months. Over a 30 year lifespan, the total fuel costs would be about $1.44 billion, bringing the costs to $16.44 billion.

Since so few nuclear power plants have been dismantled, it is difficult to estimate costs, but some believe dismantling could cost more than the original construction.

More about nuclear power can be found in another post on this website: Nuclear Power - More Evidence That It Is Not Environmentally Friendly.